Judging by the ongoing out-of-stock situations it's safe to say demand for Google's Chromecast device remains strong. One of my local Best Buy stores finally had them in stock so I grabbed one. My one-word review: Meh. I don't regret buying Chromecast but I can't find a killer app for it.

If you're not familiar with Chromecast all you need to know is that it allows you to wirelessly stream content from your computer or mobile device to your TV. It's an indirect method, as the content on your tablet/laptop gets sent to your router and then over to the Chromecast device in your TV. On the surface, that's nice. After all, projecting video from your computer to your living room screen without a bunch of cables is handy. On the other hand, the apps that support Chromecast are limited. Anything in the Chrome browser works but few mobile apps are supported. That means I can stream games from my NHL Gamecenter subscription but I have to do so within the browser, not through the Gamecenter app on my iPad.

I'd love to see Chromecast work with PowerPoint. Most conference rooms have HD TVs but sometimes the right connection dongle isn't handy. It would be great if I could just plug Chromecast into the TV and project the deck wirelessly but that's not an option yet.

YouTube, Hulu and NetFlix all work fine as well, but what's the point? My Samsung LED TV has apps built in to let me watch streaming movies anyway. All I have to do is plug a USB WiFi stick into the TV and I have full web access. Granted, managing it with my TV's remote is a hassle, so Chromecast has that advantage since you control it with your tablet or laptop.

The only use-case I can think of that really lends itself to Chromecast is video-based training. Even though you can obviously do this on one screen or a computer with a second monitor, I see the benefit of having the instructor on a much larger TV, especially if there's a whiteboard or other region to focus on besides the talking head. Learning to code, for example, would really lend itself to the instructor, their source code and whiteboard on your TV and the programming environment on your computer.

I'm also surprised there aren't any great Chromecast hacks yet. If you search for hacks or novel applications you'll be disappointed. Chromecast seems like the type of device that hackers would love to enhance, and you'd think Google would fully support their efforts.

I'll still use my Chromecast, probably a few times a week. I also plan to take it on the road since at some point I'd like to think PowerPoint access will be supported. And since most hotels have complementary WiFi I should be able to watch NHL games at night via my Gamecast subscription on the TV rather than on my smaller computer/tablet screen.

So for $35 Chromecast is a fairly small investment but its limited functionality holds it back from being worth so much more.

That seems like a contradiction, doesn't it? After all, newspapers are the ones that have been disrupted the past several years. True, but Matt Sokoloff recently wrote a very interesting article suggesting that newspapers are about to disrupt local TV. Yeah, I laughed too when I first considered it. But do yourself a favor and read Sokoloff's piece. It's one of the insightful pieces on the newspaper that I've read.

He paints a picture of local TV being fat and happy while the newspapers are desperate for survival. And, true to The Innovator's Dilemma, which Sokoloff references in the article, the TV industry is likely to be caught completely off-guard by an unexpected competitor.

The disrupted becomes the disruptor. How cool is that?

Taking a page out of ESPN's playbook

If you missed this recent BusinessWeek article about ESPN you owe it to yourself to go back and read it. ESPN is so much more than just a sports network and their brilliant strategy offers plenty of lessons for publishers. Here's just one important indicator of their success: While the average network earns about 20 cents per subscriber each month ESPN is paid $5.13. That's more than 25 times the average!

I recently finished reading a terrific ebook. It's about the 1975 World Series between the Reds and the Red Sox and the title is Game Six. Even though I thoroughly enjoyed reading Game Six there was something missing. I remember watching that series, just like I watched every postseason baseball game growing up. The image of Carlton Fisk willing his game winning drive to stay fair is iconic. I can almost see Luis Tiant's herky-jerky windup and Bernie Carbo hitting that earlier homerun to tie the game up.

I say "almost" though, because 1975 was a long time ago and my memory is far from perfect. Game Six was fun to read but the author and publisher missed a huge opportunity to make it a much richer experience for their customers.

Why doesn't this book have a ton of links built in that point to related video clips and interviews? They're all over YouTube and many other sites but they're not curated in any manner. Search for "1975 world series game six" or "bernie carbo 1975 homerun" and you get all sorts of interesting results but there's no one guiding you to be sure and watch this one but don't bother with that one or watch this one before you watch that one. I would have gladly paid more for a richer edition of this book with all those links curated by the author included.

I should note that I read Game Six on my Kindle Touch. It's the last one I'll be reading on that device as I've moved on to the new Nook with GlowLight. The video links I'm talking about would have been useless on either device, but if they were integrated with the ebook I would have gladly read it with the Kindle app on my tablet. And just to repeat: The publisher could charge me more for this web-enabled version.

Notice I didn't say anything about selling or embedding these videos with the ebook. All I'm talking about is adding links to the videos that are all over the web, so there are no rights issues to worry about. This enhancement doesn't work for every book either, btw. Game Six is just begging for this enhancement though.

Publishers often complain about the prohibitive cost of creating apps out of books. Rather than going that far and spending a fortune, why not start with the inexpensive option of simply enhancing the ebook by curating everything related to it that already exists on the web? 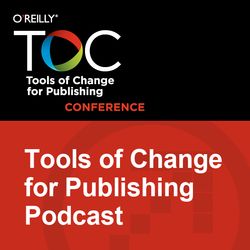 A month or so ago we decided it was time to extend TOC's reach with industry news, interviews, etc., in the form of video podcasts. I've already featured many of those segments here on the 2020 Publishing blog but now you'll be able to retrieve them in a more convenient manner.

Head over to iTunes and subscribe to the TOC podcast series using this link. Four of the first sessions are currently available via iTunes and more will follow shortly. Going forward we plan to create 1-2 new segments every week.

We're always on the lookout for new and interesting people, products and platforms to cover via this podcast series. If you know of any be sure to send them my way and I'll make sure the TOC team follows-up on them.