Disney shows how to tear down walled gardens

Tired of dealing with the fragmented mobile marketplace that iOS and Android represent? The imagineers at Disney have come up with a terrific way to address that problem. It’s both a much-needed solution for consumers and also a clever way for Disney to maintain a direct relationship with consumers who buy indirectly.

I’m referring to the Disney Movies Anywhere initiative, which lets you buy a movie on one platform and watch it on either platform. Imagine a world where all those ebooks you bought on the Kindle platform could also be read now on the Nook platform, and vice versa. You’d be free to choose the lowest price, no longer worrying about ebook library lock-in, where you’ve bought so many titles you can’t imagine abandoning that retailer.

Sounds like a nightmare for the big retailers but a huge win for consumers and publishers.

Of course, how many publishers have the Disney muscle to force retailers into such a model? Very few.

But wouldn’t it be cool if one or more of the Big Five book publishers pushed for something just like this? The first thing a reader would see when they open that ebook from Amazon, B&N, or anywhere else is a message from the publisher thanking them for their purchase and showing the steps necessary to register the purchase with the publisher so the book can be read on any ebook platform.

The publisher not only does the reader a service, they also establish a direct link to all their customers. That leads to a better understanding of customer interests and trends as well as the opportunity to upsell other products directly.

Every retailer except the largest should support this concept as well. If you’re the distant #2 or #3 ebook retailer, you should totally embrace the opportunity to level the playing field with this; you’ll suddenly gain more relevance as all those books bought on the #1 retailer’s platform could now be read on yours.

Here’s another interesting byproduct: How long would the #1 retailer continue selling ebooks at a loss when every sale no longer reinforces consumer lock-in and, in fact, becomes yet another ebook the consumer can read on competitor platforms?

TOC is dead but I'm glad to see some elements of it live on. A couple of years ago the TOC team launched the Global Ebook Market Report with Ruediger Wischenbart. Ruediger updated the report once or twice a year and we typically released a major update each October for the Frankfurt Book Fair.

The book fair opens this week and I was delighted to see that Ruediger and his team did yet another thorough update to the report for 2013. You'll find all the various formats of it here.

If you're looking for the latest data on ebook momentum by geographic region you'll find all the details in this update. If you want to read what's happening globally regarding popular formats, piracy and pretty much everything else related to ebooks you'll also find it in this report. The best news though is that the Global Ebook Market Report has always been and continues to be free. No cost, no registration, nada.

Do do yourself a favor, download this report right now and start reading. You won't regret it and you'll quickly become an expert on the global ebook marketplace.

A Band-Aid for B&N's gunshot wound

It's been a rough week for Barnes & Noble. And month. And year. And it may get worse before (if) it gets better. For those of you who have been in cryogenic sleep the last few weeks, here is a brief recap:

Barnes & Noble reported a fiscal fourth quarter loss of $188.6 million, over double what it was the same quarter a year ago, a feat accomplished by only a few other greats like MySpace, Enron, and the MC Hammer farewell tour. The Nook tablet was asked what it would like for its last meal, and William Lynch "voluntarily" removed himself from both the CEO post and the B&N Christmas Card list. Oh, and they are still planning on closing at least a third of their stores over the next decade. (Place your bets in Vegas on the over/under on the timing and number of stores.)

If we surveyed multiple astronomers on planet alignment, they may concur that B&N is preparing itself not to try and save the Nook Media, but to spin-in off, sell it, prepare for crash landing, etc. This speculation is supported when you take into account that the Nook tablets are going to be put to rest, and despite what the public is being told, these devices had to bring in a significant portion of the declining revenue stream. Underneath all of this, there has been a quiet exodus of talent from B&N over the last few months which is a huge red flag.

The biggest problem that Barnes & Noble has right now is time. Time is not its friend. It has a gunshot wound and the band-aids that have been applied will not save it, but will only slow its death. It is bleeding cash and without a decisive plan and talented people, even more things will begin to unravel.

So, now what? There is value in the Nook Media infrastructure, but transformative, strategic decisions will have to be made to turn this around. Here are a few ideas for Barnes & Noble (or whoever owns the Nook Media assets in the near future):

Nearly everyone I know in publishing is cheering for Barnes & Noble. But the clock is ticking. As a publishing and reading community, we need to realize that Barnes & Noble is not the answer for the future of books, but they can be a catalyst and significant player if their next steps are decisive and well played. Let's hope they are.

This article was written by contributor Jason Illian and was previously published by Publishers Weekly. It has been re-published here with the author's and PW's permission.

Jason is the Founder and CEO of BookShout!, an innovative reading platform that empowers publishers/authors and builds community around books.  BookShout! is working closely with publishers and authors to re-imagine the future of books.

It's challenging keeping up with publishing industry news and analysis. I have way too many content feeds to monitor and I'm sure you do too. We do our best to highlight the most important developments on the TOC website but you're forgiven if you fall behind or miss an article every so often.

Most of analysis on the TOC site is somewhat timeless but the blog format might not make it feel that way. That's why we gathered the best of the best articles and assembled them for you in a handy, to-go version. It's called Best of TOC: Analysis and Ideas about the Future of Publishing. More than 60 of the most thought-provoking articles from the TOC team and community are featured and it's available in EPUB, mobi and PDF formats. Best of all, it's completely free.

If you need to catch up on your TOC reading you no longer have an excuse. Download your copy today and tell us what you think.

What devices and formats do your customers prefer?

Most publishers create ebooks in all formats figuring it doesn't matter whether mobi is more important than EPUB or if the content is read on an iPad more frequently than on a mobile phone. That approach means these publishers have no idea how their content is being consumed. It also means they probably don't have a direct channel to their customers or some other way of polling them on their preferences.

At O'Reilly we like to stay on top of our customer reading habits and preferences. We monitor device and format trends through surveys and download statistics (from our direct sales channel). For example, here's a chart showing which primary and additional devices our customers read our books on: 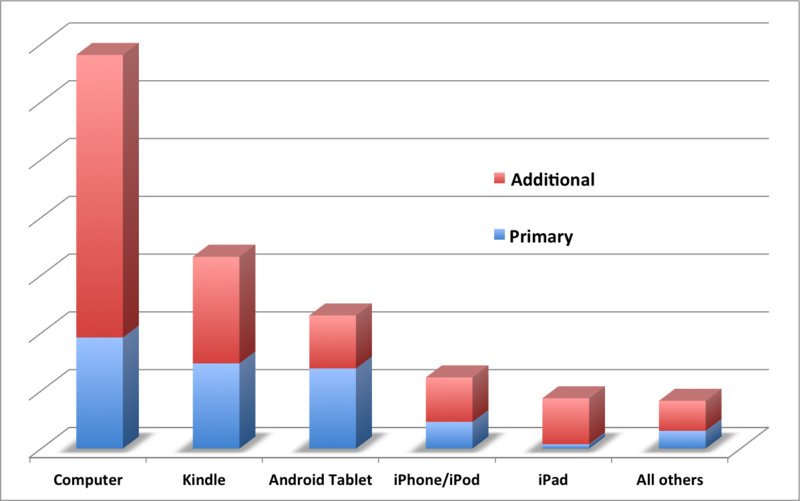 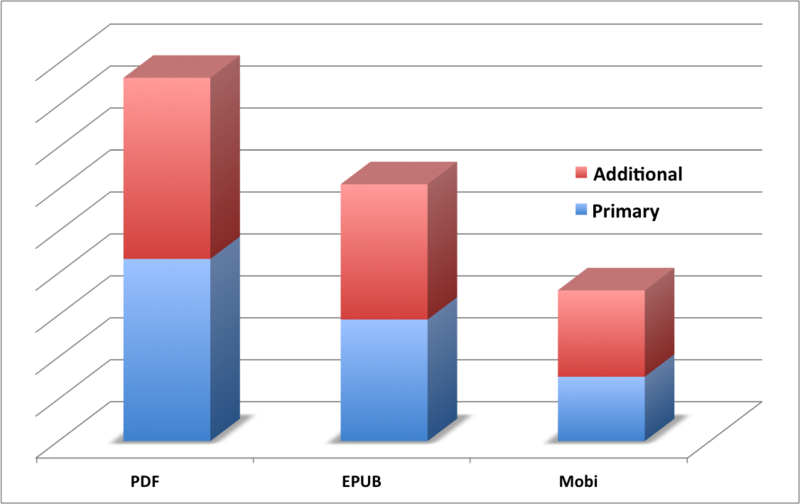 Here we see PDF still dominates; we learned long ago that most of the reading taking place on the computer is with PDFs, not EPUB or mobi files. This is a trend we've seen for years now and PDF doesn't seem to be any closer to relinquishing its format leadership status now than it was back in 2009, for example. And despite the Kindle's popularity EPUB is preferred much more so than mobi.

That begs the question: If the Kindle is such an important device for O'Reilly customers (see first chart), why is mobi a distant 3rd in format popularity? Is it possible our customers are loading their Kindles with PDFs? Sounds like a great question we need to add to our survey...

These charts reflect the preferences of the O'Reilly customer. Unless you also happen to publish technology books I'm pretty sure your results will look different from ours. But are you even taking the time to ask your customers these questions?