Why the “smiling curve” has publishers frowning 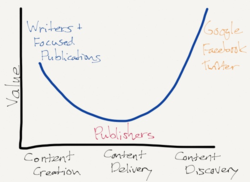 Are you familiar with the “smiling curve” phenomenon? The details are provided here, but the short explanation is that a smiling curve depicts the value-add potential for each stage of an industry. For example, in the publishing space, you have three stages of content: creation, delivery and discovery. Those three stages are illustrated with a smiling curve here as part of a terrific article from Ben Thompson of Stratechery.

Note the y-axis in that graph. It represents value, so the stages with points higher up the y-axis generally add more value to the overall ecosystem. That graph indicates two stages with high value-add (creation, discovery) and one with low value-add (delivery).

Creation and discovery rank high because they’re capabilities that are extremely hard to copy. Sure, the self-publishing movement has resulted in a glut of authors, but how many are actually making money? How many have created a brand name for themselves they can leverage every time they release a new book?

The graph indicates Google, Facebook and Twitter are some of the more well-known discovery players. Thompson’s article focuses mostly on the newspaper industry but if you add Amazon to the list of discovery players the piece applies just as well to book publishing.

The key point is this: Publishers have considerably less industry and market leverage today than they did 20 years ago. Once upon a time book publishing was built around a scarcity model and publishers thrived. Digital disruption generally eliminates (most) scarcity. The resulting abundance completely destroys yesterday’s business models and forces most players to reinvent themselves to remain relevant. Those at the bottom of the smiling curve are at the mercy of those who rank higher on the y-axis.

In his article Thompson suggests that AT&T is “trying to stave off their inevitable future as a dumb pipe between valuable content and valuable devices”. Sounds very similar to the position book publishers find themselves in today, doesn’t it?

So how does a publisher climb out of the trough of the smiling curve? It’s easier said than done but I believe it comes down to publishers placing significantly more emphasis on what they do best.

For example, has your organization truly distinguished itself by being the best at finding and nurturing new author talent in a particular topic area? What would have happened to those authors without your team’s discovery and development efforts? If you truly believe your organization was the game-changer for these authors then you need to emphasize that capability and make sure every new author in your space is aware of it.

Is it even possible for a publisher to play a significant role in discovery? Some publishers would suggest they rely on their channel partners (e.g., retailers) to take care of this. These same publishers have a marketing and PR team though. They all have websites and most of them tend to utilize social media and email marketing campaigns, so I’ve got to believe they want to play a role in discovery.

The problem is most publishers only apply a half-hearted approach to discovery. They might even offer a full e-commerce solution on their site but then they wonder why nobody comes to buy. The problem is they don’t offer consumers a compelling reason to change their buying habits. It can be done though and I offered some advice in a recent article here.

Most publishers desperately want to preserve yesterday’s scarcity-based business model but what they really need to do is acknowledge and embrace abundance, be willing to cannibalize yesterday’s revenue stream and focus on what really defines their brand for both authors and consumers. If you haven’t done so already, it’s time to read The Innovator’s Dilemma and think about how it applies to your business and the discovery challenge.

Consumer created FREE content has changed the world. Perhaps, paid content was never worth the price to begin with, as most people don't see much difference between free and paid. The value is about the same.

Thanks, great article. I will go and read all the links in your article now! Cheers, Carolyn

Perfectly described. The same business models applies to a few other things too.
Traditional & self-publishers focus on entering the market, any which way. Digital streams and social media have offered access to this marketplace equally. It seems that self-publishers have gained a better footing than traditionals, due to the greater marketing effort invested by individuals. Established publishers depended on the footprints they laid down over these years. Unfortunately, for them, these footprints and access to the general marketplace is closing down merely through the tsunami of self-publishers. The market is now wide open. Access will narrow down to quality content. The tsunami will subside and the level playing field will generate value. Time will tell.

Quality content will now select the winners and losers.