It’s been several years now since the numbers of online book sales in a month out-did the traditional bookstores. I’ve read more than one hundred articles since then that have reported that the publishing industry is dying. Then, of course, Borders went out of business and all the naysayers started saying, “I told you so”. Frankly, I can’t agree that Borders closed because the book selling space is dying but rather the management of that company just did not take the time to predict and plan for the inevitable evolution of our industry. If we take a look at any industry in history there are examples of the “Borders Phenomenon”. In every industry there are examples of companies who once sat at the top of the hill, only to meet their demise in an evolving environment that they were not ready for. Today, Amazon is the innovator, but Bezos himself, in a recent television interview said he expected some innovator to take over in the future. As the old saying goes, “you are either growing through innovation or dying through complacency”.

I wanted to write this article to share some thoughts about 2014 in publishing and book selling, which I believe will be The Year Of The Innovator. In 2014, several new companies will appear in this space that are taking radical different approaches to an age-old industry. One of the companies that is already doing this is 99designs.com.

Over the past 7 years I have authored 3 books on sales and prospecting. I am in the final stages of writing my first fiction book on this subject, called The Greatest Prospector In The World. It is a fun story of a teenage girl who grows up in Alaska. After her father, a gold prospector, dies in an accident she is forced to move to Chicago into the care of an Uncle. Armed with only the advice for successful gold prospecting passed down generations in her family, she uses these tips to become a millionaire salesperson and (you guessed it) ‘The Greatest Prospector In The World’.

I’d been watching 99designs for the past year and thought this would be a good time to give them a shot.  Why not try to have a cover designed by 99designs? 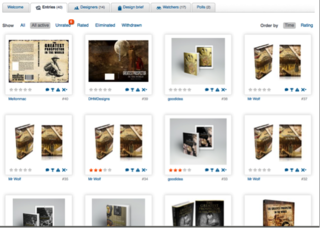 The process was incredibly simple and well thought out. The entire design process has been turned into a contest. Registered designers from all over the world can review the details and concepts of the design you are looking for and, once the contest starts, are free to submit as many designs as they like. The contest is broken into phases: Phase 1 is general submissions where anyone can submit a design. I was excited to see that I could review the portfolios of thousands of cover designers and invite those designers whom had previous works that I like.

This first phase lasted four days. In that time I had over 80 designs submitted for my cover. This is when I realized that they were onto something massive. Obviously I know that they are not the first online contest for service based web property, but they are definitely one of the biggest today. In the traditional cover design space, as a publisher, I would have 3-4 designers that I use. When I needed a cover for an author, I would choose one of the designers to give me three different design styles. I would then present these options to the author and let them choose the style they liked and then we would tweak it. Staring with these 80 initial designs made me realize that the traditional route that I described above is about to die and I needed to change my publishing company model now! You can either be ahead of the curve or lose money on the other side. 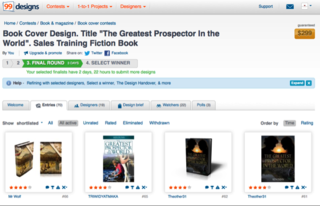 Phase 2 of the contest was even more fun. Now I was allowed to pick up to eight of the better covers and give those designers three more days to tweak their work and submit more designs.

Additionally, I was also free to choose a winner at any time in the contest if I was inspired to do so. If that isn’t enough, 99designs even allowed me to give advice and private feedback to all the designers throughout the seven days.

At the end of the seven days, I chose a cover that I believe told the story but would also look good on a hardcover or paperback. I also wanted a cover that was unique, of course, and I made sure the designers knew this up front. Here is the best part: Receiving covers from more then 60 designers and being able to give advice along the way only cost me $290. 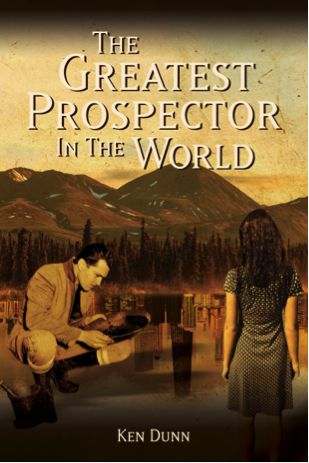 Thank you 99designs for my personal a-ha moment! In 2014, watch for more contests and auctions like this to appear on the scene. If I were in management at 99designs, I would be in talks with the big boys in publishing to white-label my service for them. It is clear that in five years the entire publishing process is going to change and more outsourced service auctions like this will become the norm.

The new online publishers are already stealing market share from the incumbents; now we will see auctions and contests all the way through the production process. In the last decade a massive number of editors, proof-readers, layout people and other folks that used to be employed in the production process have been laid off and are now independent. It is almost like the big boys have shot themselves in the head. Instead of laying off any more employees in the production process, meet with them, explain the challenge and engage these folks in finding the right solution to innovate and save their jobs!

Or keep doing what you’re doing and let someone else innovate.

This article was written by contributor Ken Dunn, CEO and Founder of Readers Legacy LLC & Next Century Publishing. Readers Legacy LLC is a new generation publisher, bookseller & incubator whose mission statement is to change the way people write, read & experience books. Readers Legacy will be launching several innovations in the next 24 months that will disrupt conventional practices in this space.

Setting aside the ethical issues of crowd sourcing, as Ken Dunn clearly has, I don't believe that this is a sustainable model for publishing.
Firstly: Cover designs will be chosen by an author's preference, without the perspective and market insight a good editor and book marketing team can provide. Their experience with the publishing marketplace is invaluable.
Secondly: As cover design becomes harshly Darwinian, the initial winners will be those who are willing use other people's efforts for their own gain. Eventually, artists won't be able to continue working for little or nothing and will move on to other jobs.
Leaving fewer cover designers, who could drive up the price of cover design.
Thirdly: we should not set aside the ethical issues of crowd sourcing. Creators should be paid for their work, designers as well as authors.

There are certain parts of your comment that I agree with, like the fact that some people will be forced to move onto other things. Unfortunately, I am only predicting the future based on what has happened in the past. Some would say that "the greatest predictor of the future is the past". Look what happened in the automotive sector: In the 40-50's the entire manufacturing process was manual and required people. By the year 2000, 70% of that process is robotic requiring 70% less workers. Where did those workers go? Elsewhere, obviously.

Further, I cannot agree that it is just a passing fad. That is exactly what people said about Twitter and Facebook. 99designs transparently says on its website that they have paid out over 65 million in commissions to designers, which could mean that the revenues of the company are over 100 million already. The company is growing every month. Clearly designers like it!

I think that a casualty in this process will be the big traditional design houses. If one is in that space, you better start innovating or suffer "The Borders Phenomenon". Yes, there will be casualties. Those are the people I referred to at the end of my article. If you are not innovating you are dying.

This is a phenomenon that theorists like Seth Godin have been predicting way back to his initial thoughts that lead to 'Tribes' & 'Linch-Pin'. You may want to check out Seth's blog: http://www.thedominoproject.com/. I am sure it will insight further debate.

Thanks for the feedback.