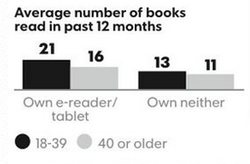 Poll results from USA Today have me scratching my head. According to their numbers, the average American adult who doesn't own a tablet/e-reader reads 11-13 books per year. The range is even higher for owners of tablets/e-readers: 16-21 books per year.

Let's simplify and just say the poll tells us the average American adult reads at least one book per month. Can you honestly say your friends all read a book a month? OK, because you're reading this I know you're in the book publishing industry, so you and your friends are outliers here. Let's talk about the real average American.

Pew released a similar report last year. If you scroll down to the "Book readers" table you'll see numbers in the center column showing mean number of books read. But look at the right column for the median and you'll find a pretty significant drop-off; the median is typically half or less of the mean. And note the table heading says that books are included here if they were "read all or part of the way through." So suddenly all those ebook samples I've downloaded, read two paragraphs of and never went back to, count in my total. Woohoo!

The mean/median difference is largely explained by all those people who read several books every week. So in this case, mean isn't as meaningful as median. But what happens when we exclude all the books that weren't read from cover to cover? How far do the numbers drop then?

As other polls have shown, my friends seem to be more interested in surfing the web and doing something other than reading books on their tablets. So even though they now have an iPad or Android tablet, their book reading habits haven't changed much, certainly not to the degree shown in the USA Today poll.

I also have to believe that if the average American was actually buying at least one book a month we wouldn't see publishers continually downsizing, regardless of whether those books were print or digital.

Finally, what would these numbers look like if we could remove all the editions 50 Shades of Grey? Between that phenomenon, and the fact that most people round up when talking about how many books they read, something tells me these poll results don't reflect reality. I'd rather see how consumers are voting with their wallets, not how smart they're trying to sound to a pollster.