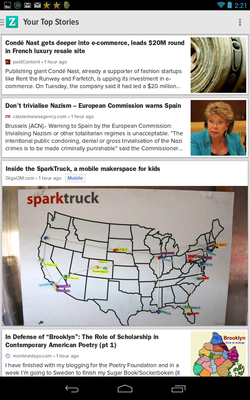 this interview with their CEO, Mark Johnson. If you're not familiar with Zite, it's a news-gathering and reading app that learns what you like and feeds you additional related content. (More on that last point in a moment.) Within a year of that interview Flipboard made it to Android, my preferred platform, and I started using Zite less and less. Why?

The Android version of Zite always felt like an afterthought. The UI was clunky at best and didn't offer the sizzle of Flipboard's UI. Yes, I admit it...I was won over by the shiny object that is Flipboard. I even went to the trouble of creating my own Flipboard magazine.

About a week ago I noticed Zite had an upgrade to their Android app and I thought I'd take another look at it. I'm glad I did.

Zite finally got things right with this latest Android version. It still doesn't have the fit and finish of Flipboard but it's lightyears ahead of the prior version.

More importantly, Zite's key feature that attracted me in the first place still makes it a unique product: Zite does a nice job finding new content I'm interested in. Although Zite's algorithm could easily lead to life in an echo chamber, I've never found that to be the case. I originally configured Zite with my favorite topics and I'm often presented with new articles in those areas from people I never would have discovered without Zite.

So if you haven't explored Zite up to now, or if you were like me and lost interest for a bit, now is the time to revisit this terrific app.