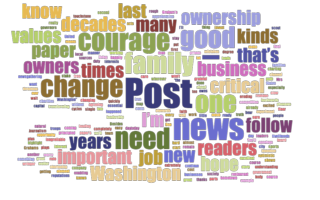 Good piece, Joe. As an old newsman and a tech pro these days, I agree that Bezos is going to bring some thoughtful and much-needed innovation to the mashup space among tablets, newspapers, eBooks and other similar content.

One thing that occurred to me as I read your piece is that local newspapers in particular are weathering the Internet storm fairly well as a rule. But accessing their content digitally is always an uneven experience. I could see Bezos using Amazon's ability to identify locale and to work with other publishers to bring local coverage to the Post context on a tablet. With an interesting revenue model, he could catapult the Post into being a news *platform*

For this and a number of other reasons, i'm pretty excited to see where Bezos drives this horse. The big stuff is going to be something we haven't even imagined.

Joe this is interesting and I am sure you're right about a lot but 2 observations.

1. It would have been much easier to integrate the Post into the Kindle Fire/Amazon Prime experience if Amazon had bought the Post rather than Jeff Bezos buying it personally. If the plan is integration with Amazon - any thoughts as to why he did it ths way?

2. Your ideas are very similar to those being thrown around a few years back when here in the UK Rupert Murdoch launched a web version of 'The Times' behind a paywall. At the time this was thought to be mad - few people where paying for online newspaper content because so much was free. However the plan was supposedly for Rupert Murdoch's satellitte and cable TV company to delvier millions of readers to the site. For pence added to their monthly TV subscription package they'd get access - through web-enabled TV. Of course the web-enabled TV never really took off but the iPad did so the online version of The Times does OK apparently.

Now Murdoch has split out his publishing from his broadcasting into seperate companies so perhaps the plan for the delivery of millions of TV subscribers isn't going to happen. (He's had a few problems here in the UK with his newspapers - you may have heard).

Hi Chris. I figure there are probably a couple of reasons why Bezos bought the Post on his own, not through Amazon. First, he's interested in being the ultimate decision-maker, not being forced to report to a board. You could argue he's doing that already with Amazon but we have no idea what sort of disagreements have come up between Bezos and the Amazon board over the years. At this point, any decision he makes about the Post are his and his alone. That's got to be an exciting opportunity for him.

Second, and related to the first point, I wonder if the Amazon board was even interested in acquiring the Post. They may feel the prospects for it are limited. Also, does Bezos avoid any awkward conflicts of interest for Amazon by not having the company own a paper that's competing against all the others they already sell?