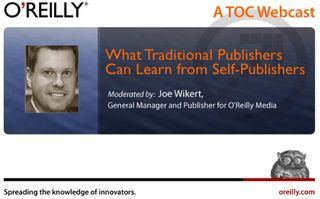 Last Thursday I had the pleasure of moderating a TOC webcast entitled, "What Traditional Publishers Can Learn from Self-Publishers."  The webcast featured the following four representatives from the self-publishing industry:

The speakers did a terrific job sharing many of the lessons they've learned over the years in self-publishing.  And thanks to several insightful questions from the audience the discussion went into some areas the speakers didn't originally anticipate.

If you missed the live version of this webcast you can catch the archived version here.  And don't forget to register for this Thursday's TOC webcast, "Digital Bookmaking Tools Roundup", with Peter Meyers.

P.S. -- I'm also still interviewing candidates for our next TOC SneakPeek webcast in August.  If you're part of a publishing startup that will still be in pre-release mode as of 8/25 email me and let's talk!

The link to catch the archived version sent me to sign up for this event said:
O'Reilly TOC Online Event Series - What Traditional Publishers Can Learn from Self-Publishers This presentation will be available to audience members until September 22, 2011 at 10:00 AM Pacific Daylight Time.
Am I at the right place to hear the archived version of what already happened?

Hi Fran. Yes, that's the right place to go. I believe our webcast team is working to extend that deadline so that it's available to view well beyond September.