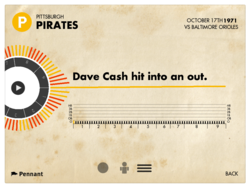 If you're a big baseball fan you probably remember the Baseball Encyclopdia.  The most recent edition from Macmillan is now 15 years old.  It was loaded with career stats and box scores but apparently became too unweildy to keep up-to-date.  The Baseball Encyclopedia was always a terrific reference but not something you'd typically spend a lot of time immersed in.

I recently discovered a new iPad app that provides details of every major league baseball game played in the past 60 years.  It's called Pennant and it's not a boring data dump like the Baseball Encyclopedia; it's a highly engaging app that's hard to put down.

The Pennant app lets me relive the 1971 World Series, one play at a time.  My (former) hometown Pirates beat the Orioles in 7 games and I get to see exactly what happened each step of the way.  This isn't just a bunch of box scores.  Pennant represents a whole new imaginative way of envisioning box scores.  As soon as I saw this video I was ready to cough up $5 for the Pennant app:

Why is this so special and what does it have to do with publishing?  I'm inspired by how the developers of Pennant took the box score, something that hasn't changed much in about 100 years, and came up with a rich iPad app that brings all those old games back to life.  There are plenty of features I'd love to see added to Pennant (e.g., career stats by player) but if baseball statistics can be recast like this, imagine how any type of content coud be completely reinvented in the tablet era.