Why Publishers Should Jump on the iPad Bandwagon 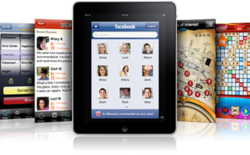 The worst-kept secret in recent tech history, Apple's iPad, was unveiled last week.  Some folks were wowed by the announcement while others were left asking, "is that all there is?"  I was somewhere in between.

A buddy called me that day and said he bet Jeff Bezos was..., well, requiring an undergarment change.  I told him I doubted it.  Not because the iPad won't have a significant impact on the Kindle...it will...but because Wednesday's announcement was the confirmation of something Amazon, like the rest of us, already knew about.

I'll get to the Kindle effect in a moment, but first let me say why I think every publisher on the planet should warm up to the iPad.  One word: Pricing.  Not device pricing but content pricing.  Ever since the Kindle arrived in late 2007 Amazon has led us on this downward path to lower and lower prices.  On the one hand, I don't blame them for this.  After all, we, the publishers, are the ones trying to build a significant business around quickie print-to-e conversions.

Amazon has been more than an accomplice in this regard though as they've developed a device that discourages and effectively prevents publishers from enriching their content offerings.  Two plus years into the life of the Kindle and they're just now announcing plans to open the platform to third-party developers?!  Are you kidding me?  Did they not notice that the App Store is one of the keys to the iPhone's success?

Compare the functionality of the Kindle to what the iPad will offer.  Look at the rich content opportunities the iPad presents.  Your newspaper won't just be a lousy text feed with a few grayscale images; it will be full color with video and audio built in.  Your travel guide won't just be some static black-and-white rendering of the full color print edition; the iPad will bring it to life with the type of imagery you'd expect and probably some you didn't even anticipate.  And how about your how-to guides?  No longer will they be quick conversions from print format.  They too will have all sorts of other types of video and audio content to make the job easier.

All this means we won't have to lower the price because customers feel they're getting print content with no added value.  In fact, the current model also typically loses the option to resell or pass along to a friend.  All that, along with the fact that customers realize there's no cost of goods or returns exposure for the publisher, is why Amazon has us all contemplating a future of $9.99 ebooks.

That model will still exist but Apple offers a different one.  The Apple model only differs if publishers are willing to make the investment in new forms of content, not just the written word.  If you're not willing to experiment with video or audio, for example, upside from the Apple platform will be limited for you.  Just remember that other publishers, as well as a whole bunch of start-ups, will be experimenting in this space, so watch out!

Btw, I don't mean to suggest that the iPad is guaranteed to become a runaway hit.  It's not the device I'm enamored with as much as the capabilities the device represents.  Others will undoubtedly mimic it and offer similar functionality at a lower price.  And while some consumers will stick with the Kindle platform, the way forward is one with full color, video capability and a connectivity option that's built for more than just downloading books.  (Seriously, have you ever tried doing any sort of web browsing on a Kindle?)

Here's something else to keep in mind with the iPad: It's not just an ereader.  Whereas the Kindle is a one-trick pony, the iPad enters the game with more than 140,000 other uses.  OK, I've only got a couple dozen of those apps on my iPhone, but that's roughly a couple of dozen more things than I can do on my Kindle!

None of this is a surprise to Amazon though.  Why do you think they created the Kindle iPhone app last year?  I'm sure that tool will let you read your Kindle books on the iPad, so at least we won't feel like total idiots for supporting the closed Kindle platform.

As much as I originally wanted the Kindle to succeed I'm extremely disappointed with Amazon's lack of innovation.  They're still well-positioned to be an econtent player, if not the leader, but I don't see them being dominant on the device front now.

I've got a tip for Mr. Bezos & Co. if they plan to remain committed to the eInk approach: Go for the low-end of the market and offer a sub-$100 dumb device that tethers to your smartphone for connectivity.  Dump the Whispernet service and the hardware required to support it.  Everyone has a cell phone, so leverage their existing service instead.  A sub-$50 option would be even better.  Do you think they could sell a few $49 MiniKindle's with this configuration?  I do, and they'd still be able to sell all the content they want.

FWIW, I'm currently planning to get an iPad when they're available.  I'll probably go with the mid-range 32-Gig model with wifi only.  I spend most of my time in one hot spot or another, so I don't see any reason to pay for the hardware or monthly fee on a 3G plan.

As for my Kindle, well, that's about to become a hand-me-down.  My wife said she'd like to try it out.  I doubt she'll have any interest in taking over my Kindleville blog though.  Kindleville has been largely ignored the past several months, so if you know anyone who plans to stick with Amazon's platform, ask them if they're interested in becoming the Kindleville custodian!

I have felt that way about the Kindle for a long time. Amazon had a great opportunity and blew it. When the iphone came out it was cool but expensive. But Apple opens it up and allows third party developers to make it well worth it. I am not sure any company in history can say they allowed outside companies make their product better without spending a dime or lifting a finger, all the while creating a new industry and profiting from it. To me that is genius.

My small press was among the first to add our titles to the Kindle Store, back in 2008. It's been a good experience. I'd LOVE to "jump on the iPad Bandwagon." I just don't know how. There is no evidence that Apple is going to be very friendly to independent publishers. Neither Sony nor Barnes & Noble will give us the time of day. Apple has allegedly been aggressively canvassing "the Big Six" to make their books available, but it looks like the rest of us small presses are S.O.O.L. Apple is one of the most territorial and proprietary companies on earth--where other big computer/Internet companies are absorbing as much as they can, Apple's approach is like Disney's--create an entire homogenous, self-contained universe and keep all foreign influences out. You can't use anything on an iPad that isn't approved and provided by Apple. How well this will succeed remains to be seen. But hey, if Steve Jobs contacted me tonight, By Light Unseen Media would be signed up for the iBook store tomorrow. I'm just not holding my breath.

Yes... I would love to know how to contact Jobs or Apple to create multi-media books that combine art lesson books with video demo just by touching the screen. Anyone know how to get hold of the the right people at Apple? LearnToDrawFAST@cox.net.