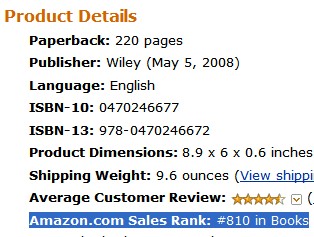 Ah, the ever popular "Amazon Sales Rank."  Often debated, never fully understood.  Amazon doesn't say a whole lot about what the ranks mean on their site so we're left to speculate like the number-crunching data addicts that we (or at least some of us) are.

I've seen several good sales rank blog posts over the last few years but this one from the Beneath the Cover blog is probably the most useful, straightforward summary of all.  Blogger Bill Stephens also mentions he's going to focus a future post on showing how to calculate total retail sales from the Amazon sales rank...

To be honest, I've seen this tried before with mixed results at best.  There's really no tight connection between Amazon sales rank and how many copies of a book have sold at Borders, Barnes & Noble, etc.  It's generally safe to say that a highly ranked book on Amazon is also doing well at the brick-and-mortar outlets, but I know of know formula that accurately calculates total retail sales off the Amazon rank.

If you're as curious about Amazon sales rank as I tend to be you should also look at two related services: TitleZ and RankTracer.  Also, here's another fascinating look at Amazon sales rank from the folks at Dog Ear Publishing; this article includes some actual sales results from Dog Ear titles.

Unfortunately, Bill Stephens doesn't know what he is talking about. Amazon.com says they calculate sales rank on an hourly basis. If you don't believe that, purchase a book with a ranking over 1,000,000 and wait for an hour or so. The sales rank will jump drastically due to that single book sale. Bill's blog is probably based on information that is still floating around the web from before Amazon.com changed how they calculate sales rank. Morris Rosenthal studied that method, but it has changed since that time. Amazon.com has not released the details of their method, but their website indicates that it works something like what I described at http://www.timothyfish.net/Articles/Article.asp?ID=46 some time ago.

There is no way to calculate quantity from this number. If you wanted to track the number over time, you could count the spikes and determine the number of books sold for books selling less than one per hour, but it is much harder to determine when a book is selling more than that.

I wouldn't be surprised to find that Amazon's ranking algorithm is changed from time to time, just like Google's algorithm is. So even a accurate description of how it works today might be wrong tomorrow.

You know what - even if Bill's article isn't exactly right, I still have more and better info than I did before... Joe, thanks for all the links and info... great post imo

As stated, Bill's post is a mix of current and grossly outdated info. For current info, as well as monitoring multiple Amazon sales ranks on six of its worldwide sites, you might want to visit Sales Rank Express, www.salesrankexpress.com.

Aaron is dead on with his comment. I'd like to add that NovelRank.com does all domains as well, but does tracking over time and sales estimations. Yup, completely free (and no ads!).