The Game, by Ken Dryden 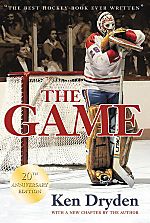 As a hockey fan growing up in the late '60's and early '70's, Ken Dryden was one of my heroes.  The Canadiens seemed to always win the Stanley Cup in those years and Dryden was the goalie to watch in the '70's.  The Game chronicles the latter stage of his career and provides a great deal of insight into the NHL, the Canadiens and, of course, Dryden himself.

My favorite part of this book is when he takes the time to drill down deeper into the quirky personalities of certain teammates.  When you think of the Canadiens of the '70's, players like Guy Lafleur, Larry Robinson, Bob Gainey, Guy Lapointe, Steve Shutt, and of course, coach Scotty Bowman come to mind.  Dryden devotes much of The Game to coverage of teammates, coaches and even trainers, all written in the cerebral style he was known for throughout his career.

Any true hockey fan will want to read this book, regardless of how much or little you know about Dryden and Canadiens history.  Perhaps the most disappointing aspect of the NHL today is where it stands after the 2004-05 lockout.  Although Dryden didn't touch on this in The Game, he offered these prescient thoughts towards the end of the book (and his NHL career):

Expansion and the WHA behind it, it will be a time to turn inward, to put its (the NHL's) unwieldy house in order.  Like an aging adolescent having grown too fast, it will get reacquainted with its parts, get them in hand, and do something with them.  It will be a time for realism, and stability, for chastened hopes and dreams deferred--except one.  Off ice, the whispered word will be "cable."  But it will represent a more modest dream this time, and more realizable, if the promised bonanza is only for some.  It is time for a deep breath, a pause, a time to return the game to the ice.  For that is the real tragedy of the 1970s, and the real opportunity for the 1980s.  It is on the ice that its next great challenge lies.

Gee, he could have written much of that in the last 3 years and it would have been just as applicable.  The league is on the rebound but the first two games of the Stanley Cup Finals, the ultimate hockey championship, are relegated to the Versus network.  Ugh.  I even had to bite the bullet and sign up for Versus network service yesterday so that I could watch games 1 and 2, featuring my beloved Pittsburgh Penguins against the evil Detroit Red Wings.

How sad is that?  The Stanley Cup Finals start out on some third-tier cable network.  Maybe it's time to toss Gary Bettman out as NHL commissioner and replace him with someone like Ken Dryden...