A Plea for Personality in Book Advertising

This INDEX // mb blog post offers some perspective on book ads and how they've lost personality over the years.  The key point is that most book ads these days feature the cover and not the author.  Actually, now that I think about it, I'll bet I've seen dozens and dozens of book ads in USA Today, BusinessWeek and countless other newspapers and magazines over the past six months...and I can't recall the specifics of a single one.

It's interesting to look at the Paper Cuts blog post INDEX // mb links to as well as the related slide show of 1960's-1970's book ads.  The author photos really do add personality to the various ads.  I guess that's one of the reasons I've always liked the cover design for our WROX imprint; even though the WROX cover template is consistent from one title to the next, the author photo element helps make each cover that much more unique and memorable. 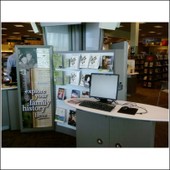 Today was opening day for the new Borders concept store in Fishers, Indiana.  Technically speaking, the store is located in Noblesville, but it's so darned close to my house that I'll be referring to it as "the Fishers Borders."  As an admitted book nerd I couldn't avoid visiting the store over lunch today.

If you missed this earlier post, Borders is in the process of opening a series of new outlets with more of a high-tech feel.  The first thing I noticed when entering the Fishers store wasn't so much the technology kiosks as it was the dramatically improved book merchandising approach.  Like most stores, bestsellers are on a variety of front-of-store displays; but this particular layout seemed to be much more open and inviting, not just a rack of face-out titles.

The tech kiosks are all clustered together in an area that's nicely set off from the books and CDs/DVDs.  You'll find stations where you can buy customized CDs, research genealogy (and buy a book about your family name), get help with your digital camera/music player or explore the world of self-publishing with Borders partner Lulu.  They've also set up a special website to help support these new concept stores, which you can find here.

Borders also recently announced plans to focus more on bestsellers and face-out displays.  The change is noticeable in the Fishers store, and I mean that in a good way.  Even though the store's footprint is on the smaller side and they're clearly carrying less titles than the typical superstore, the browsing experience felt different from what I've come to expect in the typical big-box store.  In other words, I liked it quite a bit and plan to visit it regularly.

P.S. -- For those of you in central Indiana, even though the store is already open, the "official grand opening" is slated for the weekend of May 9-11.  According to the brochure I picked up today there will be several author signings, demos and other great reasons to stop by for the grand opening festivities.