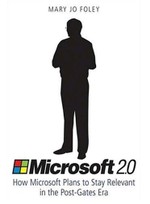 The buzz surrounding Mary Jo Foley and her new book, Microsoft 2.0, continues to build.  Our group just published this exciting new book and it's been fun watching all the press coverage Mary Jo has been getting for it.

In addition to the videos from Fox Business that I've embedded below, Mary Jo has also been recently interviewed in The Washington Times and Wired.  The Wired article is particularly entertaining.  Be sure to read it if you're curious to hear Mary Jo's thoughts on how long Ballmer will stick around, what she believes Microsoft's biggest challenge is and why the failed Yahoo acquisition is a good thing.

By the way, the evolution of Microsoft in the post-Gates era didn't end when we published this book, of course.  That's why Mary Jo has also launched a companion website for the book where she'll provide updates and perspective on future developments.

As a fan of both Freakonomics and The Undercover Economist I'm convinced I need to read an upcoming title called Why Popcorn Costs So Much at the Movies.  I enjoy these books that talk about hidden trends in the economy and everyday products.

The author, Richard McKenzie, also created a video trailer for the book which I've embedded below.  I'm seeing more and more authors and publishers investing in promotional videos for their books.  This one is pretty simple but it's extremely effective; now that I've watched it I feel like I know more about the author and his book than if I would have simply read through a book description on Amazon, for example.

I plan to read Why Popcorn Costs So Much at the Movies and will post a follow-up review when I'm finished.

Normally I wouldn't speculate about something like this, but after hearing a common theme so many times I can't resist...  I'm talking about Google's AdWords program and whether it's a good investment.

In the past few weeks I've had three different conversations with three different people from totally different industries and all of them were complaining about the poor ROI from their AdWords campaigns.  Only one of these three companies is involved in book publishing, but it was interesting to hear how all three have come to the same conclusion: They're all abandoning any future AdWords campaigns because the click-thru's have been so expensive and the conversion rates are miserable.

My own browsing experience is a reasonable example.  I rarely click (maybe 6 times in my whole life) on any of the "sponsored links" in Google search results and I've never bought anything as a result of those clicks.  Never.

I wonder how long it will be before someone comes up with a more effective advertising model than this.  I realize that Google is making money hand over fist but it sure seems like there are opportunities to build a better mousetrap.  I'm hoping that 10 years from now we'll look back and laugh at the simplicity and inefficiency of the current online advertising model.

The Next Lencioni Book

I've read every book Patrick Lencioni has ever written and I always look forward to the next one.  The Three Signs of a Miserable Job seems like it came out so long ago (even though it was just last August!), so what's the next Lencioni hit?

I discovered the answer to that question while sitting through a Wiley sales conference presentation earlier this morning.  The book will be called The 3 Big Questions for a Frantic Family and it's due out in September.  What a great idea!  I've learned quite a few valuable lessons from Lencioni's business/management books and I can't wait to read his wisdom on family life.  Btw, he's not just a business expert; he and his wife are also raising four boys, so his family insights come from right in the trenches!

The sales conference key title session also featured presentations on many other noteworthy upcoming titles.  Here are the ones that caught my eye and will be on my "must read" list:

In Search of the Obvious, by Jack Trout (October) -- Trout is another one of my long-time favorite authors.  I particularly enjoyed many of his earlier books that he co-authored with Al Ries.  The subtitle for this one is "The Antidote for Today's Marketing Mess."  Sold!

The Noble Lie, by Gary Greenberg (September) -- This one is described as "a controversial look at how we too often turn to science to resolve moral questions it can never answer."

The Cool Factor, by Del Breckenfeld (October) -- This book is all about partnership marketing and the author is Director of Entertainment Marketing at Fender Musical Instruments Corp., the name you see on so many guitars, amps and other gear.

Literary Video's tagline is "Creating Multimedia Content that Sells Books."  I discovered this service last month and exchanged a couple of e-mails with David Woodard, Founder and Creative Director.  With the ever increasing importance of video in the publishing world I jumped on the opportunity to do a blog interview with David.  Here's what he had to say about Literary Video and what they're up to:

JW: You had been working for a publisher in Nashville for awhile and decided to launch this new business venture, Literary Video.  What's your vision for the business and what drove you to create this start-up?

DW: Working in book marketing for eight years taught me many things, but one of the most impressive things I learned was that the best salesman for a book is almost always the author. There are exceptions to this, but by in large it is true. That is why when the bigger books release (think John Grisham, for example), these authors pop up in various media like The Today Show, Good Morning America, or even Oprah or People Magazine. No one can sale the story like the author can.

The internet and the proliferation of video online gives publishers and authors new and relatively inexpensive ways to reach their audience. According to USAToday, "Book videos are increasingly common and, publishers say, essential." They are the new book cover.

Literary Video has come into existence to help publishers and authors not only develop multimedia content, but multimedia content that sells books. We feel our background in book publishing and marketing gives our clients an advantage that a generic video production house can't give offer. We not only facilitate the creation of content but help mold the content in a way that sells the project most effectively.

Changes in the marketing structure of the publishing house for whom I had been working gave me a unique opportunity last fall to exercise not only the skills and knowledge I had learned but also the contacts and network I had cultivated the last eight years in the industry. Literary Video was born.

JW: Success here largely depends on how many eyeballs see each video, right?  With that in mind, will Literary Video also help show authors how to increase the exposure of their videos?  If so, are there any details you can share?

DW: You are right in that like any advertising collateral, impressions are key. A book video is not an end in and of itself, but a part of a greater strategy. However, book video offers a more intimate "experience," and, it has the capacity to become viral. Book videos are marketing by offering content and not interruption.

But just as posting a web site does not guarantee visitors, creating a video doesn’t automatically assume viewers; you have to have a bigger marketing strategy in place. However, there are sites, like YouTube, BookVideos.TV, & ChristianReader.TV that people visit in order to find video content. A compelling video posted to the right places can find an audience. This is where Literary Video becomes not just a content producer, but a partner in distribution strategy as well.

JW: I'm a big fan of widgets and it would seem they would represent a useful vehicle for getting videos out on as many websites as possible.  Are you looking to offer widget functionality for Literary Video?

DW: Incorporating video into widgets represents the cutting edge of video distribution. If done right, it not only offers a compelling way to present the video in an easy to use fashion, but also creates a "portable" marketing collateral that can become very effective in viral and grass roots marketing efforts. In other words, if a viewer can forward the widget to someone else, or even take the widget and embed it in their own blog or website, then the widget has become portable. This can also be effective in sales efforts, as book retailers can post these widgets on their e-tailing sites and product pages.

If a client desires to use widgets, Literary Video can develop the content, widget, and help strategize for the most effective use of the widget.

JW: What are the most innovative and interesting elements of some of the better book trailers/teasers that you've been involved with?

DW: I can think of three that I thought exploited unique dimensions of books that would have been lost in traditional advertising efforts.

My Go to Bed Book is a charming children’s book in the tradition of Good Night Moon. It was originally published in the 1950s. B&H Publishing Group released a 50th anniversary edition in the fall of 2007. The backstory as to how this edition came to be is in itself a very charming story. We created a mini-documentary telling this story called The Story Behind the Book, as well as an e-Galley for the book.

Squat is novel written by first time novelist Taylor Field. Taylor's personal story as a pastor running a mission in New York's tough lower East Side is the inspiration and backdrop for this novel. Think Rent meets The Passion of the Christ. The colorful world of Manhattan's Alphabet City is a major character of the book itself. Squat Movie is a mini documentary (embedded below), shot on location in the east village with Taylor as our guide, bringing the landscape and the real life people that inspired this tale. Squat Movie was awarded the bronze Telly Award for 2007.

Biblical Barbie is a fun book trailer that emphasizes entertaining content over hard selling. Making fun of stereotypes, the video is just fun, with a soft sell for the book The New Eve at the end. It is viral marketing at its best. We partnered with stop-motion film maker Greg Pope to create book video that entertains first, and sells second.