Why It's a Great Time to be an Author

Diane Eble provides a wealth of writing and publishing wisdom on her Words to Profit website.  She also writes a great blog called Your Book Publishing Coach.

This article on Diane's Words to Profit site caught my attention this weekend.  It's called "Why This Is the Best Time to be an Author."  I tend to agree with her.  Despite all the change going on in our industry, no, let me correct that and say because of all the change going on in our industry, now is indeed a wonderful time to be an author.  When you factor in the countless self-publishing and print-on-demand solutions that exist today it's safe to say authors have never had so many options to consider.  Additionally, there's never been a better time to create and leverage your own platform via blogging, podcasting and other services and tools.

The world of publishing is definitely going through an evolutionary phase.  Those who can figure out how to adapt, add more value and extend the services they offer and solutions they provide will be the winners down the road.

I was fortunate to have been asked by the ECPA to make two presentations at the PubU conference in Chicago earlier this week.  My first was a session on web communities in publishing and the other was a keynote on blogging.  I wish I could have stayed for the entire conference.  HarperCollins CEO Jane Friedman's keynote the night before mine was very inspiring, especially when she spoke of the various technology initiatives they have underway (e.g., their widgets and content digitization).  PubU is an excellent conference and one you should consider attending in the future, btw.

There's one slide in my web communities presentation that still sticks with me.  It's an excerpt from this article about Facebook in the November issue of Wired magazine.  The article talks about CEO Mark Zuckerberg's vision of Facebook's future.  I put the slide on the screen and asked everyone to read it and give it some consideration.  Here's what it said:

Imagine if, every time you logged on, you weren't greeted by NYTimes.com or even a Google News like aggregator, but a collection of headlines and blog postings, written or handpicked by your closest friends and relatives. Instead of information spreading hub-and-spoke like from major media outlets, it would flow to consumers the way it does at a dinner party, through people they know and trust. The result, Zuckerberg says, is that "it may no longer be optimal to have a few big media companies in the center controlling the flow of information."

How true.  I encouraged everyone in the room to go tinker with Facebook.  Some see Facebook as a fad, this year's MySpace.  I don't buy that logic.  Zuckerberg made a key strategic decision earlier this year to open Facebook up to third-party application developers.  Sure, most apps today are silly time-wasters.  It won't be that way forever though.  This platform has the potential to be enormous.

I also asked everyone in the room to check and see whether their company is doing anything on Facebook.  You ought to ask the same question in your company.

I subscribed to MLB's online video service the first year they offered it.  I dropped it the next season because it was unreliable and the video often froze or was painfully choppy.  Based on what ZDNet's David Berlind has to say in this post I'm glad I never went back.

I have yet to see an outstanding DRM solution.  Most seem to incorporate too many restrictions as a deterrent for thieves but in reality wind up penalizing the honest customer. That's why when we launched our WROX Blox product line last month we opted for a DRM-free approach.

We've considered a number of non-DRM solutions for e-content.  In fact, at one point we joked about inserting the customer's credit card number into the WROX Blox PDF -- now that's a way to get someone's attention and reduce the likelihood of content getting released into the wild!!  My point is there's more than one way to skin this cat and I hope others will continue to experiment more with non-DRM solutions as well.

Our world class marketer Kelly T. reminded me that we have another in-world author event scheduled for Second Life tonight.  This one is for Creating Your World: The Official Guide to Advanced Content Creation for Second Life.  The event runs from 7-9 PM SLT (which is also Pacific time).  Authors Aimee Weber, Kimberly Rufer-Bach, and Richard Platel will attend the event where Second Life residents will have the chance to "meet and greet" the authors, ask questions about the book, and learn how to get started creating awesome SL content.  The event will be held on Purple Stripe’s Island.  Here are the SLurl and the Short URL if you'd like to join us.

Both Aimee and Kim will also be doing a demo during the event.  Aimee's is on texture baking.  Kimberly will show how to create a customized information kiosk. 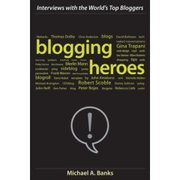 Our soon-to-be-published Blogging Heroes, by Michael A. Banks, has been getting its fair share of publicity in the blogosphere recently.  Much of this activity has to do with our decision to run a free content campaign that Chris Anderson, Mr. Long Tail, referred to as "a clever marketing strategy."

The book features a series of interviews with 30 of the world's most successful bloggers.  As we got closer to our pub date we decided to offer each blogging interviewee a PDF of their chapter.  We suggested they consider posting the content for their readers and many have taken us up on the offer.  Besides Chris Anderson, you'll also find sample chapters from Mark Frauenfelder, David Rothman, Steve Garfield and Gary Lee.