Chris Webb told me to try it out and so I did.  I took his advice, created a Twitter account and gave IM tracking a shot.  I decided to  track two different phrases to start: Leopard and Twitter itself.  I figure Apple's Leopard release is probably the biggest thing happening in the tech world right now so there ought to be a lot of chatter.  Tracking Twitter itself simply enabled me to do some comparisons on buzz levels.

If I were to Twitter my initial reaction it would be the following: "Signal-to-noise ratio is awful...calibration options required!"  (Fortunately I managed to keep the message below the 140-character ceiling.)  Here, for your reading pleasure, are the first 5 IMs that came through for my "Leopard" and "Twitter" tracks:

TwitterIM (3:42:25 PM): (thericketandoo): sitting on the couch with Michele. my twitter is so awesome.

See what I mean about the poor signal-to-noise ratio?  I'd say maybe two out of five were (sort of) worthwhile bits of information; xxdesmus is apparently having trouble installing Leopard while sixfoot6 made it through with flying colors.  But do I really have to skip over three other messages just to find two that have some value?  After scanning through the last 10 minutes worth of recent track messages I'd say the 3-for-2 rate is pretty accurate, at least for these two phrases.

Despite all that, I see promise for a service like this.  They need to start by adding more filtering and other calibration features.  For example, I could easily live without seeing any further messages from thericketandoo, so is there any way for me to filter those message from my future feeds?  To be fair, filtering individual users would require more work than I'm likely to invest in this, so how about another option?...

Is there any way to rate other users?  What if I determine I really like what sixfoot6 has to say and I'd like to let others know they're likely to find value from his/her messages?  Why not offer a feature where when I say "track xyz" I can also say I only want to see messages from users who average a 4-star rating out of 5?  If that doesn't result in enough tweets to suit my needs, let me ratchet that setting down to 3-star ratings, but please, oh please, don't make me sift through all these other random, content-free messages!

Do customization features like this already exist in Twitter?  I couldn't find them, but if I missed them, please let me know because I'd like to test it further. 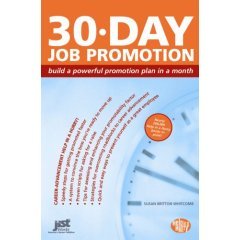 How much time did you invest strategizing for your last job promotion?  If you're like most people, you probably figure (a) your work speaks for itself and (b) you're the best candidate for the job.  That's not much of a strategy, and while it still might lead to a promotion, a better approach would be to use Susan Britton Whitcomb's 30-Day Job Promotion as a planning tool.

Be forewarned that you'll need to do a good deal of work to get the most out of this book.  Then again, if you want to get that promotion, isn't it worth the effort to use a tool like this to lay out your plans?  If nothing else it shows the promoting manager just how enthusiastic and committed you are to the new role.

One of my favorite elements in this book is a section called "The 10 Characteristics of Promotable People."  Are you convinced you're truly promotable?  If so, check yourself against this list and see how well you score.  More importantly, learn your weaknesses and invest the time and energy required to become stronger across all 10 areas.

Here are some of the other headings and sections in this book that make it worth every penny: Mistakes to Avoid, How to Respond to a Posted Opening, 15 Common Roadblocks (to a promotion) and an entire chapter on Salary Negotiations.  The last 30 pages of the book consist of real life success stories.  Even though your situation is probably quite different from all the ones discussed, you'll find plenty of great lessons to be learned in this section.

Can you really get promoted in 30 days?  Your mileage will vary, of course, but no matter what time frame you're working with, 30-Day Job Promotion is like having a career counselor right there by your side.

Memo to Daniel Lyons: It's the Facebook Apps, Stupid!

I really enjoy Daniel Lyons.  His Forbes articles are interesting and entertaining, but it's his alter ego, Fake Steve Jobs, that I appreciate the most.  In fact, his Fake Steve book, oPtion$, just came out and I picked up a copy at B&N over the weekend...can't wait to read it.

So with all the respect I have for the guy, imagine my disappointment when I read his latest Forbes article, Party Crashers, where he pokes fun at Facebook, pretty much writes it off and scoffs at all of us oldsters who are flocking to it.

Daniel, please realize Facebook is a platform in transition.  The decision to open it up to third-party apps will help it evolve into a more useful resource for all ages.  Yes, most (all?) of the applications that exist today are silly time-wasters but that doesn't mean this will always be the case.  Have some patience, realize that a younger generation already spends loads of time there and have faith that many, many useful applications will rise above the rest.

Btw, although I think Lyons is dead wrong about Facebook, I totally agree with his Twitter observations.  I don't want to read a blow-by-blow description of anyone's day, so I'm sure as heck not going to bother Twittering my own!  It reminds me of that wonderful book, No One Cares What You Had for Lunch.

What Can Be Learned from Guitar Hero?

Well that's certainly an odd question, isn't it?  After all, what does the wildly popular video game Guitar Hero have to do with book publishing world?  I asked myself that question after I read this article in the latest issue of BusinessWeek.

Five years ago, would anyone in the music industry have thought that this game would help create a new revenue stream?  Sure, it's a tiny revenue stream, but (a) it's a start and, more importantly, (b) as the article notes, it's an excellent promotional tool for other revenue streams.  Games also represent the sort of sticky experience advertisers and media types love.  People tend to spend hours and hours playing these darned things and the opportunities to expose customers to new products, services, etc., are endless.

Am I suggesting that we can somehow weave the content of a programming book into a video game?  Of course not.  But what about content that's more relevant and can become part of the product experience?  For example, maybe there are some great tips in Guitars For Dummies that could find their way into this product.  I'm not talking about random content placement; perhaps the game could evolve to where knowledge of this information is required to advance to the next level, earn points, etc.  That exposure raises brand awareness and probably results in additional book sales.  Simple, but effective.

Yeah, I know that's a bit of a stretch, but this model is worth keeping an eye on.  You can bet the music industry is paying attention.

The OUPblog on Publishing's "Upper Hand"

Evan Schnittman of the Oxford University Press blog recently featured this post about the current state and future of book publishing.  He talks about three important reasons why the book publishing industry finds itself in a very favorable position with some of the world's largest technology companies: discoverability, print on demand (POD) and deep repositories of content.

On the discoverability front, Schnittman talks about the ongoing battle for search supremacy between Google and Microsoft.  It doesn't seem like a fair fight given Google's dominance, but at least that hasn't stopped Microsoft from trying (e.g., Live Search Books).  Improving the book search and discovery experience probably isn't anywhere near the top on either company's priority list but it's been fun watching each one try to leapfrog the other with new features.  New features likely lead to more exposure and discoverability, both of which are important in the content world...assuming this all leads to new revenue streams in the form of book sales or advertising income.

Schnittman's comments about POD are valid, but I still think the dramatic change to this playing field won't happen till POD equipment is cheap enough to sit in the back room of your local bookstore.  The value of POD isn't that significant if you still have to wait a day or two for your book; instant gratification could be POD's "killer application" and help level the scales between online and brick-and-mortar stores.