The Future of Microsoft...In Book Format 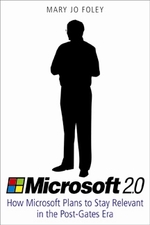 At the end of their current fiscal year (6/30/08), Bill Gates is scheduled to turn the Microsoft keys over to Ballmer, Ozzie & Co. while he focuses on other endeavors.  That's a pretty significant step for such a giant of technology, so what does the future hold for the folks in Redmond?

Other than Microsoft's own high-ranking executives, Mary Jo Foley is probably the most highly qualified person to answer that question; her All about Microsoft blog is closely watched by analysts, skeptics, fans and Microsoft insiders around the globe.  Fortunately for us, Mary Jo is putting her thoughts into a new book that will be published by our group here at Wiley next Spring.  You can read more about Microsoft 2.0: How Microsoft Plans to Stay Relevant in the Post-Gates Era in this announcement which Mary Jo posted on her blog earlier today.

Hugh Macleod at Gaping Void has a nice bit about this also at
http://www.gapingvoid.com/Moveable_Type/archives/004212.html
He has been working with Microsoft recently on telling their story in a better way. Good stuff!