I was glad to see that Amazon recently announced a collection of widgets that are ready for use on your blog or website.  The list includes some very useful tools and much of the functionality you'd expect from an Amazon widget.  I had one idea in mind and was all ready to install an Amazon widget to implement it on my blog.  The problem is it doesn't exist, at least not yet.

I was hoping Amazon would offer a widget that would display a list of 5 or 6 of the books I've reviewed on their site.  Covers would be displayed and as you hover over each one with your mouse a small pop-up window would appear and show the full text of my review.  No go.  This sort of widget wouldn't be that hard to create but I have no idea whether Amazon plans to offer one with this functionality.  I used their "What do you think?" link at the bottom of their widget page to suggest the idea.  I'll let you know what I hear back...

P.S. -- You could use the same widget to do some other cool things too.  For example, let's say you find another regular Amazon reviewer who you've grown to trust.  Why not feature their recommendations on your blog/website using the same widget?

Purdue Confirms Notre Dame is as Bad as Advertised 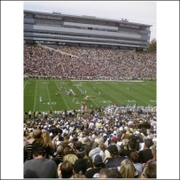 I thought the 22-point spread was a bit insulting to poor Notre Dame.  In the end, Purdue should have won by much more.

I got to spend yesterday afternoon at Ross-Ade Stadium watching Purdue beat up on the Notre Dame Fighting Irish.  This in-state rivalry always brings out the funniest t-shirts and banners.  One of my favorites from this year was a large sign at the game which read "Even Rudy Could Start On This Team."

Purdue was fortunate to escape with a win though.  After getting well within the red zone several times in the first half they wound up settling for far too many field goals, although it was good to see Chris Summers knock 'em all down.  Trading 7's for 3's allowed Notre Dame to get back in the game in the second half though.  Of course, despite their 5-0 record, Purdue fans know this isn't a second-half team; lots of yardage and points have been given up by Brock Spack's defense after halftime.  This game was no different.

If you're a Purdue fan, be concerned.  Local columnist Bob Kravitz is right to ask whether these guys are for real.  Ohio State comes to town next Saturday and should give Purdue their first true test of the season.  Call me a fair weather fan but I'm not holding my breath...

Looking for an Editorial Director in San Francisco

A fellow VP/publisher here at Wiley just asked me if I'd post some information about a job opening in his San Francisco-based group.  Here's his summary:

Wiley, a 200 year old company with the energy and growth of a teenager, is looking for an editorial director to lead the professional program in leadership, management, and HR. The editorial director will head an editorial team of 7 in acquiring, developing, and successfully publishing 65 new print and online titles a year under the Jossey-Bass and Pfeiffer imprints. We need someone with college, university press, or academic press experience, knowledge and interest in online/electronic as well as traditional print formats, and a driving ambition to grow the business globally.

If you're interested in the position be sure to connect with this team by sending a message to sfjobs@wiley.com.

Hooray for Amazon!  My family owns nothing but Creative Labs MP3 players so iTunes has never been a viable option.  Plus, with DRM being a major hassle, I'll always opt for buying and ripping a CD over paying for a limited-use download.  Always.

The few songs I have bought over the years (for my daughter) came from walmart.com, which has always proven to be a reliable service, btw.  When Walmart recently announced they were breaking free from the DRM chains I figured life couldn't get any better.  And then Amazon announced their MP3 store. Totally DRM free.  Works on any MP3 player.  Most songs are 89-99 cents.  Outstanding.

Sure, a couple of the major labels are still missing from this deal; as long as they choose to remain wrapped up in DRM I won't be buying their music online anyway.  Let's see if Amazon can help me make a dent in the  10 gig of free space I currently have on my trusty Creative Labs player...

I've got to hand it to the folks at HarperCollins (HC).  Earlier this year they announced their Browse Inside widget and now they're rolling out a new author website service called AuthorAssist.

Although most technology book authors have already started their own websites or blogs, there are plenty of non-tech authors out there who haven't and could use some help.  AuthorAssist will make it much easier for HC authors to establish a web presence, but it will also enable HC to play a role in that presence, which could include an advertising income component at some point.

So for a pretty modest investment, HC creates a fantastic service for their authors and something that could become a valuable online resource center down the road.