The Cult of the Amateur, by Andrew Keen 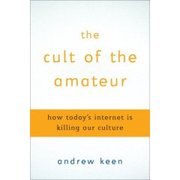 As I read Andrew Keen's The Cult of the Amateur, I couldn't help think that if he could wave a magic wand, Keen would love to see the Internet go away.  He seems to romanticize about the days of gatekeepers controlling what TV shows we watched, what news we read/saw, what music we heard, etc.  I imagine if he would have lived in the early 1900's he probably would have complained about this horrible thing called the automobile and how it's killing the horse industry.

I kept asking myself if he wrote this book just to become a controversial contrarian.  When I read a book I often dog-ear the pages that caught my eye.  With Keen's book, I not only dog-eared more pages than usual, I also wound up writing notes in the margin, mostly about misleading points the author was making.  Fear, uncertainty and doubt are all key ingredients in Keen's recipe.  Of course when he talks about things like child pornography and the online gambling problem, very few people are going to disagree with his position.  But when it comes to wikis, blogs and other so-called amateur content, I think he's way out of line.  Here are a few excerpts and my thoughts on them:

These days, kids can't tell the difference between credible news by objective professional journalists and what they read on joeschmoe.blogspot.com

Is there still such a thing as "objective professional journalists"?  Are all "professional" journalists really and truly objective?

Our trust in conventional advertising is being further compromised by the spoof advertisements...

I'm not sure I've seen the words "trust" and "conventional advertising" used together before...

Of course, every free listing on Craigslist means one less paid listing in a local newspaper.

Isn't that what happens in a free world?  If someone finds a better way to build a mousetrap or deliver an ad, why is it so bad to offer the new service/product?  Just because Craigslist doesn't feel the need to monetize the ad like a newspaper, so what?  That creates new competition for the paper.  They need to innovate or die.

No software can replace the implicit trust we place in a movie review by...Roger Ebert...

Probably not, but I tend to trust my friends and their recommendations more than the so-called experts in this case.  If an "amateur" movie critic has a blog and my likes/dislikes happen to map well to his or hers, I bet I'll wind up listening more to them than the "professional".

With more and more of the information online unedited, unverified, and unsubstantiated, we will have no choice but to read everything with a skeptical eye.

Is this really such a bad thing?  I mean, didn't the phrase "don't believe everything you read" become popular long before the Internet hit the scene?

They (Townhall.com, HotSoup.com, etc.) are the digital equivalent of online gated communities where all the people have identical views and the whole conversation is mirrored in a way that is reassuringly familiar.  It's a dangerous form of digital narcissism; the only conversations we want to hear are those with ourselves and those like us.

I could close my eyes and almost think Keen is describing the Democratic or Republican National Conventions...

Huh?!  Wouldn't this just be $331,000 that dropped to Frito-Lay's bottom line, available for reinvestment in the business or payout to the company's shareholders?  That amount is still very much in the economy!

OK, I'm going to stop at this point.  That last excerpt was from page 62...I folded over quite a few pages after that, but this post is already getting to be too long.

Believe it or not, I think everyone reading this blog should read this book.  Why?  It's important for you to analyze Keen's rationale and decide for yourself.  I tend to think he's way out of line with much of his message, but time will tell.

God it's like you are reading my mind! I just finished Keen's book.

The last point you make about Frito-Lay's bottom line is spot on. Keen consistently makes that basic error throughout the text. It is as if a dollar lost to mainstream media or the traditional creative arts is one lost to the world and will never exist again, it is bizarre.

What is more he equates once of twice the cost of piracy with a direct loss to the music/movie/creative industries when in reality if all the illegal downloads were legal and paid for the legal downloads would be far cheaper so the overall loss is considerably less.

I completely echo your view that everyone should read it though, it is a very good read if only to raise the heckles and force the reader to really think about the changes (positive and negative) the internet is abetting.

Hi Joe,
I agree with everything you said here. Keen is just resistant to change, afraid of it or just upset the way things are changing. I was a journalist and I know first hand that as hard as they try to be objective and fair in their reporting, they are subjective and selective on what news the public sees. I left the industry because of that.

For Keen, I suggest he digest the wisdom of William Gibson, author of Neuromancer:

"The future has already arrived, it's just not widely distributed."

About reading with a skeptical eye: I've read so many articles about new my home of Buenos Aires & Argentina in the New York Times and other giants of U.S. media which are completely off-the-mark that I now trust online travel blogs more than travel articles in any newspaper or magazine.

It seems that Keen is indeed playing the role of controversial contrarian, for which there is an obvious market.