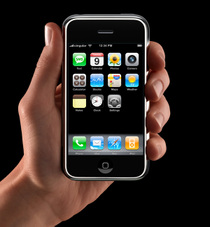 Steve Jobs announced one of the industry's worst-kept secrets today: Apple's iPhone.  Yes, you too can own one of these shiny new devices for the amazingly low price of $499 for the 4 Gig model and $599 for the 8 Gig model.  What a deal!

Oh, don't forget that you have to sign up for a 2-year service plan for either model.  Let's see...if the iPhone goes through as many model updates as the iPod did, that means you'll be drooling at your friend's iPod 2.0 model before you're even halfway through the contract period on your 1.0!  You'll probably be two and maybe three generations behind everyone else by the time your contract is up.  Where do I sign up?!

When am I going to wise up and realize Jobs is going to i-ize every appliance in your house?  I keep thinking people are onto this whole "it's really the same as that other competing product but with a different interface at twice the price" formula that has made Mr. Steve a very rich man. Alas, I was wrong with the iPod and I'm sure I'll be wrong with iPhone.  Can't wait to see iRefrigerator though; it will definitely be a much cooler way to...well...to keep things cool at home!

Seriously, I would have been wowed by the iPhone if they could have figured out how to integrate one really innovative feature: satellite radio.  Yes, I'm hooked on my Inno XM device but it's one more gadget to lug around.  How long will it take before XM or Sirius integrate a player into a cell phone?  I think that's what it's going to take before satellite radio truly becomes mainstream, btw.  As long as you have to buy a separate player (even if it's dirt cheap), consumers will have a hard time justifying a monthly subscription fee for the service.  On the other hand, if you integrate it with a cell phone, and lump it in with the insanely high rates we all pay for various add-on's (e.g., text messaging, ring tones, etc.), suddenly it seems like a more reasonable deal. When will XM/Sirius realize that the $15/month dedicated device model will only take them so far and that they need to come up with a $5/month add-on serviced to a cell phone plan?!

I love my iPod, but it is currently at the Apple Repair Center - for the second time in 13 months. So with an iPhone, when the MPS player gives out, you lose your phone for two weeks as well? I think I will stick with seperate pieces.

Eric, great point about the less attractive side of "convergence": The more one device is used for multiple purposes, the greater the pain when it fails!

Yeah, it's way overpriced. Yeah, it doesn't have enough storage capacity for songs. Yeah, it doesn't do anything that a Windows Media SmartPhone doesn't do. Yeah, it's limited to working only with Cingular. But it'll sell a ton anyway, because (1) It's Apple, therefore the cool technogeeks will have to have one and (2) It does everything it does the way it should be done -- once again, Apple gets the functionality right. That said, the bigger impact will be long-term, as better and cheaper models get introduced in 2008, and the rest of the cell phone industry catches up about six months later.